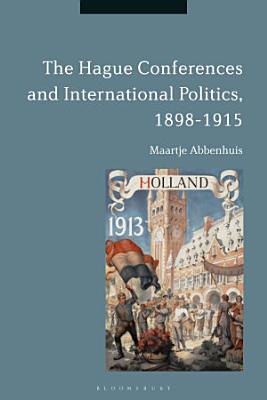 Beginning with the extraordinary rescript by Tsar Nicholas II in August 1898 calling the world's governments to a disarmament conference, this book charts the history of the two Hague peace conferences of 1899 and 1907 – and the third conference of 1915 that was never held – using diplomatic correspondence, newspaper reports, contemporary publications and the papers of internationalist organizations and peace activists. Focusing on the international media frenzy that developed around them, Maartje Abbenhuis provides a new angle on the conferences. Highlighting the conventions that they brought about, she demonstrates how The Hague set the tone for international politics in the years leading up to the First World War, permeating media reports and shaping the views and activities of key organizations such as the inter-parliamentary union, the international council of women and the Institut de droit international (Institute of International Law). Based on extensive archival research in the Netherlands, Great Britain, Switzerland and the United States alongside contemporary publications in a range of languages, this book considers the history of the Hague conferences in a new way, and presents a powerful case for the importance of The Hague conferences in shaping twentieth century international politics.

The Hague Conferences and International Politics, 1898-1915

Beginning with the extraordinary rescript by Tsar Nicholas II in August 1898 calling the world's governments to a disarmament conference, this book charts the h

Transforming the Politics of International Law

This volume examines the role of League of Nations committees, particularly the Advisory Committee of Jurists (ACJ) in shaping the statute of the Permanent Cour

Before the UN Sustainable Development Goals

Gabriela A. Frei addresses the interaction between international maritime law and maritime strategy in a historical context, arguing that both international law

Exploring how modern internationalism emerged as a negotiated process through international conferences, this edited collection studies the spaces and networks

The Logic of Humanitarian Arms Control and Disarmament

This novel and original book examines and disaggregates, theoretically and empirically, operations of power in international security regimes. These regimes, va

Britain and the Intellectual Origins of the League of Nations, 1914–1919

An innovative study of the pre-history of the League of Nations, tracing the pro-League movement's unexpected development.

This volume sheds light on how lawyers have made sense of, engaged in, and shaped international politics over the past three hundred years. Chapters show how po

"[A] brilliant new book . . . Humane provides a powerful intellectual history of the American way of war. It is a bold departure from decades of historiography