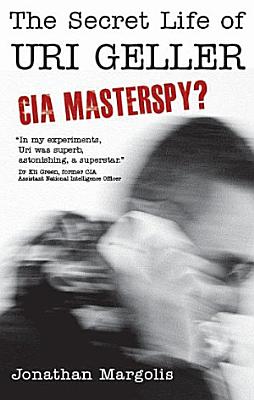 New Biography Shows Celebrity Spoon Bender, Uri Geller, Secretly Worked for U.S. Intelligence Agencies This authorized biography of Uri Geller tells his life story and explores recent claims about his clandestine work with the CIA and the Israeli intelligence agency, the Mossad, during and after the Cold War. Geller is best-known for his Vegas-style act where he bends spoons, describes hidden drawings, and performs other paranormal feats. Technology journalist and former Time magazine correspondent, Jonathan Margolis, worked alongside Geller and Oscar-winning filmmaker Vikram Jayanti on the book, to be published October 15th Jayanti debuted a documentary at the Sheffield (UK) Film Festival commissioned by the BBC and entitled, The Secret Life of Uri Geller: Psychic Spy? Jayanti directed the Muhammad Ali documentary, When We Were Kings. “Now there is the internet and the NSA's ability to monitor massive amounts of chatter around the world,” says Margolis. “40 years ago, however, intelligence agencies needed to explore way-out ways of monitoring the bad guys. The people I interviewed on-the-record for the book were adamant that Uri Geller wasn’t only able to gather secret information remotely and perform other espionage tasks, but was extremely good at it.” Throughout his career, Uri Geller has courted controversy. He is known globally as an entertainer and friend of pop star, Michael Jackson, who was best man at the renewal of Geller’s wedding vows. He also made millions as a psychic adviser to the oil industry, but as a paranormalist was humiliated in a 1974 appearance on ‘The Tonight Show’ with Johnny Carson. And yet there are photographs from 1987 of Geller together with Al Gore, Yuli M. Vorontsov, First Deputy Foreign Minister of the Soviet Union, and several other high ranking US officials at nuclear arms limitation talks between the U.S. and the Soviet Union. What was Geller doing in these pictures? Margolis brings proof that Geller was there at the invitation of the chairman of the Senate Foreign Relations committee to influence Vorontsov‘s to sign the treaty. There is also new testimony from a living senior former CIA official and others who worked for the Agency confirming that Geller was exhaustively laboratory tested on behalf of the CIA, and was used as an intelligence asset of the CIA and Defense Intelligence Agency – and that under President Carter’s presidency, using psychics in intelligence matters was known about and accepted at the White House. Michael Mann, publisher at large for Watkins, said: “Uri is world-famous for mind reading and spoon bending but his work with the CIA and Mossad during the 60s and 70s as well as, it seems, in post 9/11 times, has until now remained secret. The Secret Life of Uri Geller tells the real story of his extraordinary life and his alleged continuing undercover work for the West’s major spy agencies.”

The Secret Life of Uri Geller

The Secret Life of Uri Geller

Ghosts, Spirits, and Psychics: The Paranormal from Alchemy to Zombies

This fascinating work provides a complete overview of paranormal phenomena, including the beliefs, attitudes, and notable figures who have attempted to explain,

The definitive history of the military's decades-long investigation into mental powers and phenomena, from the author of Pulitzer Prize finalist The Pentagon's

Myth-OS is an in-depth magazine for the unexplained. Interpret the evidence. Icarian-Sea is your passage to Western civilization. If you're thinking of extendin

The Secret Life of the Universe

Blending Eastern and Western philosophies with insights into nature, ecology, and physiology, this exploration of the place of humankind within the universe —

The Secret Life of Kids

It all began when James Peterson was a camp counselor and two children, watching him meditate, described the colors they saw around his form: “…we saw color

Martin Ruggles: NEANDERTHALS AND CIVILIZATION How Much Did They Know and When Did They Know It? Rita Louise, Ph.D.: CREATURES OF THE UNDERGROUND Where Mythology