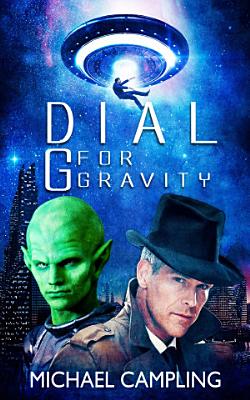 Brent Bolster has a particular set of skills. Unfortunately, most of them have no practical application whatsoever. Now, he's met his worst nightmare: an alien with a clipboard. So begins the adventures of Brent Bolster and his ragtag coalition of associates. With a client in the shapely form of a gorgeous dame, a musclebound assistant, an alien with an attitude, and fish called Algernon, Brent uncovers a galactic conspiracy. Meanwhile, a mighty warship is on its way. Affectionately known as The Skull by its crew of warlike Andelians, the ship causes all who see her to tremble. And in command is the notorious Admiral Norph, a warrior who makes Genghis Khan look neighborly. The scene is set for a galactic confrontation. Can Brent handle it? Probably not. But it will be fun to watch him try. You’ll get a kick out of this comedy because all sci-fi fans love a tongue-in-cheek reference. Dial G for Gravity takes the world of an old-fashioned gumshoe and propels it into the future. But like all good sci-fi, it has something to say about the way we live now and where we’re headed. So grab a pot of joe, fill your favorite Star Fleet mug, and start reading. Praise for Dial G for Gravity All from GoodReads reviewers. I stayed up far later than intended to read more of it. Brent is fun, an idiot, but fun. The humour is reminiscent of Douglas Adams novels and Red Dwarf. I thoroughly enjoyed it and found it even more tongue in cheek then M.I.B. It's funny, intriguing, there's hints of romance, plotting and tremors of intergalactic war. What more could you ask from your story? This is a great book to read. The cast of characters are vivid, hilarious at times. And unique to say the least. A mystery in the form of a comedy. I loved it A comic galactic mystery that's a cross between Red Dwarf, MIB and Ghostbusters, Mikey Campling's excellent novel Dial G for Gravity will have you rolling in the aisles, before checking under the bed and in the wardrobes for little green men, before you can relax and go to sleep tonight! This book is such great fun. I especially liked the characters in it. They are so very believable and likeable too. I loved their quirkiness and personality flaws. The story is compelling, the characters are three dimensional, it's complex and definitely un-put-down-able. The humor is much more adult, dryer, with a more classic wit.

Brent Bolster has a particular set of skills. Unfortunately, most of them have no practical application whatsoever. Now, he's met his worst nightmare: an alien

The Modern Dictionary of Arts and Sciences, Or, Complete System of Literature

Coal Iron, and oil; or the practical american miner a plain and popular work on our mines and minera; resources

Special edition of the Federal Register, containing a codification of documents of general applicability and future effect ... with ancillaries.

Provides a definitive guide to terminology, techniques, and system information for individuals working in both Macintosh and Windows environments, explaining ho

The London encyclopaedia, or, Universal dictionary of science, art, literature, and practical mechanics, by the orig. ed. of the Encyclopaedia metropolitana [T. Curtis].