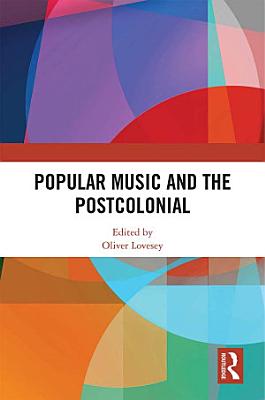 Popular Music and the Postcolonial addresses the often-overlooked relationship between the fields of popular music and postcolonial studies, and it has implications for ethnomusicology, cultural and literary studies, history, sociology, and political economy. Popular music in its many forms exploded in popularity, following developments in sound technology and shifting population demographics, in the 1960s, the era of radical agitation against empires in the global south but also within the very heart of Europe. Popular music aided in fostering and documenting such resistance to violent oppression and in liberating the hearts and minds of the colonized. This collection offers a timely intervention in this field, showing popular music’s role in defining or undermining certain colonial and postcolonial nations, in expanding and complicating the domain of postcolonial theorists—including the "founder" of postcolonial studies Edward Said—and in decolonizing the ears of its diverse, sometimes antagonistic, audiences. This book was originally published as a special issue of Popular Music and Society.

Popular Music and the Postcolonial

Popular Music and the Postcolonial addresses the often-overlooked relationship between the fields of popular music and postcolonial studies, and it has implicat

Established in 1971, Nass el-Ghiwane is a legendary musical group that transformed the Moroccan music scene in the last decades of the 20th century. The charism

Postcolonial Studies Across the Disciplines

Bringing together contributions from various disciplines and academic fields, this collection engages in interdisciplinary dialogue on postcolonial issues. Cove

Ethnic minorities, principally from Africa, Asia, the Caribbean and the surviving remnants of France's overseas empire, are increasingly visible in contemporary

The Oxford Handbook of Postcolonial Studies

The Oxford Handbook of Postcolonial Studies provides a comprehensive overview of the latest scholarship in postcolonial studies, while also considering possible

This book examines the role of music in British-South Asian postcolonial literature, asking how music relates to the construction of postcolonial identity. It f

This book is the first to explore style and spectacle in glam popular music performance from the 1970s to the present day, and from an international perspective

This volume examines the transnational character of popular music since the Cold War era to the present. Bringing together the cross-disciplinary research of na

Nationalism and Cultural Practice in the Postcolonial World

A major re-appraisal of debates on politics and culture in postcolonial and cultural studies.

The Postcolonial Condition of Names and Naming Practices in Southern Africa

The Postcolonial Condition of Names and Naming Practices in Southern Africa represents a milestone in southern African onomastic studies. The contributors here