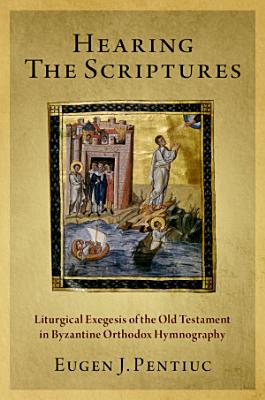 "This is a book on the use and interpretation of Scriptures in Byzantine Orthodox hymnography. The idea of writing such a book emerged with the publication of my The Old Testament in Eastern Orthodox Tradition (Oxford University Press, 2014). In the last two chapters of that work, I dealt with two media through which liturgists have interpreted the Scriptures, namely, the "aural" (e.g., hymnography, lectionaries, homilies, etc.) and "visual" (e.g., portable icons, mosaics, frescoes, liturgical acts, etc.) modes of interpretation, which I coined "liturgical exegesis." In that work, I made a general remark about liturgical exegesis: "The condensed liturgical exegesis is again a challenge to hearers and readers to locate the texts, events, images, and figures woven into the hymnography." I took on that challenge myself, having researched and written the present book, which seeks to identify Scriptures in Byzantine hymnography, a challenge as difficult as finding the proverbial needle in a haystack. Through a comprehensive and minute analysis of selected hymns, I have strived to make sure that no scriptural needle, as tiny and unobservable as it might be (i.e., scriptural hapax legomena [Gr. forms "occurring once" in the Bible] or rare words), remains hidden in the depths of the hymnic tapestry. Therefore, the first goal of my research was to find Scriptures, primarily Old Testament, in Byzantine Orthodox hymnography. The selection criteria for which hymns to consider rested fundamentally upon the presence of references and hints of the Old Testament in the targeted hymns. However, due to the resilient "hiddenness" of scriptural material within the poetic fabric of the hymns, it took me quite some time to decide which hymns should be selected and then thoroughly analyzed. The second goal of my research was to identify key features and hermeneutical procedures characteristic of "liturgical exegesis" in comparison to "discursive exegesis" (i.e., the interpretive method of ancient biblical commentaries)."--

"This is a book on the use and interpretation of Scriptures in Byzantine Orthodox hymnography. The idea of writing such a book emerged with the publication of m

Collects of the Day

Biblical Inspiration and the Authority of Scripture

It has been some time since Catholic and liberal Protestant theologians stopped writing seriously on bibliology. Meanwhile, conservative evangelical theologians

A Commentary on the Holy Scriptures: Proverbs

'The rich man and Lazarus' (Luke xvi. 19-31) a practical exposition