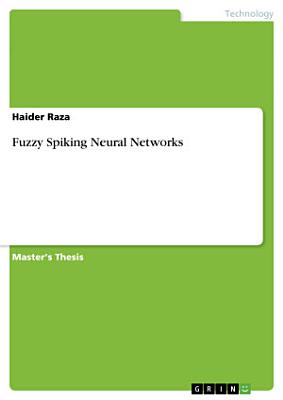 Master's Thesis from the year 2011 in the subject Engineering - Computer Engineering, grade: 8.84, Manav Rachna International University, course: Master of Technology (M.Tech), language: English, abstract: This dissertation presents an introductory knowledge to computational neuroscience and major emphasize on the branch of computational neuroscience called Spiking Neural Networks (SNNs). SNNs are also called the third generation neural networks. It has become now a major field of Soft Computing. In this we talk about the temporal characteristics’ of neuron and studied the dynamics of it. We have presented SNNs architecture with fuzzy reasoning capability. Neuron selectivity is facilitated using receptive fields that enable individual neurons to be responsive to certain spike train frequencies and behave in a similar manner as fuzzy membership functions. The network of SNNs consists of three layers that is input, hidden and output layer. The topology of this network is based on Radial basis Network, which can be regarded as universal approximators. The input layer receives the input in the form of frequency which produces the spikes through linear encoding. There is another method of encoding called Poisson encoding; this encoding is used where the data is large. The hidden layer use Receptive Field (RF) to process the input and thus it is frequency selective. The output layer is only responsible for learning. The learning is based on local learning. The XOR classification problem is used to test the capabilities of the network. There is a problem of continuous updating of weight arises. This issue of weight is resolved by using STDP window and fuzzy reasoning. The dissertation demonstrates how it is possible to obtain fuzzy reasoning capability from biological models of spiking neurons. The fuzzy spiking neural network implements fuzzy rules by configuration of receptive fields, antecedent conjunction with excitatory and inhibitory connections, and inferencing via a biologically plausible supervised learning algorithm. In this way, the resulting system utilizes a higher level of knowledge representation.

There are six sections in this book. The first section presents basic image processing techniques, such as image acquisition, storage, retrieval, transformation

Issues in Networks Research and Application: 2012 Edition is a ScholarlyEditions™ eBook that delivers timely, authoritative, and comprehensive information abo

The Springer Handbook for Computational Intelligence is the first book covering the basics, the state-of-the-art and important applications of the dynamic and r

Recently, increasing interest has been shown in applying the concept of Pareto-optimality to machine learning, particularly inspired by the successful developme