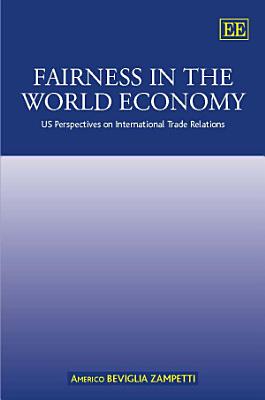 Americo Beviglia Zampetti s Fairness in the World Economy provides an important lens into understanding fairness debates in contemporary trade discourse. . . an important contribution to the trade literature. . . the historical excavation that Fairness in the World Economy provides is of great value. Students and scholars alike will find Zampetti s clear and concise history of US trade policy from the founding to the present to be extremely useful. More importantly, at a time when there is widespread argument that too few share in [globalization s] benefits [and] too many have no voice in its design and no influence on its course, Fairness in the World Economy invites its readers to consider the adequacy of the level playing field notion of fairness and to grapple with the politically contentious question of how trade can help create a more just international economic order. Jeffrey L. Dunoff, The American Journal of International Law This is an unusually timely and insightful work, addressing the crucial issue of the justice of globalization. The author avoids the polemics and abstractions with which this question is usually treated; his economic literacy as well as hands-on policy experience in international and transnational institutions, make this a uniquely practical, balanced and nuanced account, bringing much clarity to a heated debate, which usually divides the different disciplines and specialities rather than inciting their engagement. Robert L. Howse, University of Michigan, Ann Arbor, US This volume describes the birth (with all the birth defects) of the notion of fairness in the US. The extent of the author's research is quite breathtaking: not only does he delve into an infinite series of official and semi-official documents, but he also looks at case law, opinions expressed in the literature etc., to come up with an expression of (US) fairness that does not suffer from selection bias. But this is only half what the author has accomplished through his work. He goes on to examine how US fairness has been exported to international institutions (such as the GATT/WTO regime) and demonstrates how, once discussed and shaped among all trading partners, it has come back to the US in a different form. The book thus provides both the inside out and the outside in perspective. It will prove invaluable for the political scientist, the economic historian and the lawyer alike. Petros C. Mavroidis, Edwin B. Parker Professor of Law, Columbia Law School, US and University of Neuchatel, Switzerland & CEPR This book represents a significant scholarly contribution to the field of international political economy, with particular respect to the evolution of the multilateral trading system. The author engages effectively with the current debate concerning the conflict between the legalistic foundations of the multilateral trading system underpinned by the equality of nation states and the demands for fair trade on the basis of inter-personal equity. It is a coherent and well-researched book on a critically important issue that has not received the significant attention that it deserves within the field of international trade policy. Robert Read, Lancaster University Management School, UK In an international context, fairness is particularly important, since only a system which is perceived by its participants as fair can command acceptance and compliance. The main focus of this study is to investigate the development of the notion of fairness in US trade policy and law as well as the impact this notion has on international trade discussions and rule-making, and especially on the formation of the multilateral trade regime. The contention of the author, Americo Beviglia Zampetti, is that fairness concerns, which have been present in the US trade policy debates and treaty practice since the Republic s inception, have contributed to shaping these debates and practice over the years, both at home and abroad. These concerns were

Fairness in the World Economy

This book arises out of papers delivered at the World Congress of the International Society of Business, Economics and Ethics (ISBEE) held in Cape Town in 2008.

Fairness in International Trade Policy : Equality and Differential Treatment in Theory and Practice

A Question of Fairness

The Notion of "fairness" in International Trade Relations

This new Report concludes that market access begins at home. It argues that further reducing barriers to trade between developing countries needs to be an essen

"First of an annual series on market access issues, focusing on reducing global poverty by improving market entry for developing countries and fairness in trade

This book brings together a collection of papers that Robert M Stern and his co-authors have written in recent years. The collection addresses a variety of issu