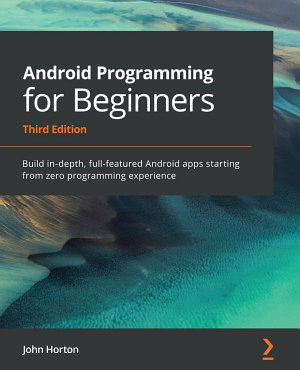 Learn the Java and Android skills you need to start developing powerful mobile applications with the help of actionable steps Key FeaturesKick-start your Android programming career or just have fun publishing apps to the Google Play marketplaceGet a first principles introduction to using Java and Android and prepare to start building your own apps from scratchLearn by example by building four real-world apps and dozens of mini appsBook Description Do you want to make a career in programming but don’t know where to start? Do you have a great idea for an app but don't know how to make it a reality? Or are you worried that you’ll have to learn Java programming to become an Android developer? Look no further! This new and expanded third edition of Android Programming for Beginners will be your guide to creating Android applications from scratch. The book starts by introducing you to all the fundamental concepts of programming in an Android context, from the basics of Java to working with the Android API. You’ll learn with the help of examples that use up-to-date API classes and are created within Android Studio, the official Android development environment that helps supercharge your mobile application development process. After a crash course on the key programming concepts, you’ll explore Android programming and get to grips with creating applications with a professional-standard UI using fragments and storing user data with SQLite. This Android Java book also shows you how you can make your apps multilingual, draw on the screen with a finger, and work with graphics, sound, and animations. By the end of this Android programming book, you'll be ready to start building your own custom applications in Android and Java. What you will learnUnderstand the fundamentals of coding in Java for AndroidInstall and set up your Android development environmentBuild functional user interfaces with the Android Studio visual designerAdd user interaction, data captures, sound, and animation to your appsManage your apps' data using the built-in Android SQLite databaseExplore the design patterns used by professionals to build top-grade applicationsBuild real-world Android applications that you can deploy to the Google Play marketplaceWho this book is for This Android book is for you if you are completely new to Java, Android, or programming and want to get started with Android app development. If you have experience of using Java on Android, this book will serve as a refresher to help you advance your knowledge and make progress through the early projects covered in the book.

Mobile application development is now the hottest trend in the programming world. In this book you will learn Android Programming Basics.

This book is a complete tutorial for the beginners in Android development. It can be read by the students of Btech in Computer science or Information Technology

Android: Android Programming and Android App Development for Beginners (Learn How to Program Android Apps, How to Develop Android Applications Through Java Programming, Android for Dummies)

Learn all the Java and Android skills you need to start making powerful mobile applicationsAbout This Book- Kick-start your Android programming career, or just

Learn to Program Android Apps in Less Than 24 Hours! This Book Android Programming & Android App Development teaches you everything you need to become an Androi

Android programming is a great skill for any aspiring computer programmer to have.Being able to create apps for Android can be fun, but also lucrative.Wouldn't

The updated edition of the bestselling guide to Android app development If you have ambitions to build an Android app, this hands-on guide gives you everything