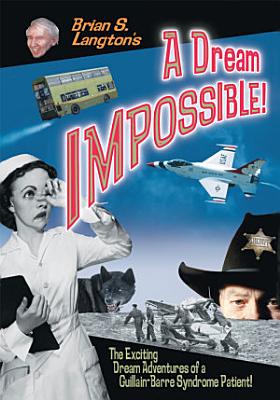 After I had published my first book, A First Step - Understanding Guillain-Barré Syndrome, it occurred to me that the dream sequences described in that book would make for an interesting read on their own, as a collection of short - but impossible - stories. Thus were sewn the seeds for this publication. The 'postscripts' that have been added are included to assist readers who have not read the earlier book, and who therefore may not have a full understanding of the circumstances I found myself in. During my seven-month confinement in Intensive Care, on a ventilator for breathing assistance, diagnosed with severe acute chronic Guillain-Barré Syndrome - sometimes referred to in its abbreviated form as GBS, I experienced many dreams and hullucinations, some of which are described in the book. The medications I was taking, the inability to distinguish between night and day, being thrust into an unfamiliar environment, or something inherent in the disease itself may have been the cause. Although these dreams are not necessarily in the sequence in which I dreamed them, it is possible to connect them to certain events or phases of my illness. Initially, I was paralysed from my toes up to my eyebrows. This did not appear to inhibit my mobilty in some of the dreams though. One moment I was in a wheelchair, the next flying an F16 fighter jet, even though I had never flown before, other then as a fare paying passenger. I found these episodes much more intense than the garden-variety dream. In fact, most seemed so real that sometimes it was difficult, if not impossible, to separate them from reality. Every effort has been made to keep the original story lines. It must, of course be understood there were a few - although very few - grey areas, and only in those situations have I linked different parts of the story by the logical threads suggested by circumstances. For the most part, my recall of these dreams was total. Except for my relatives, the names used to identify characters are fictitious and used to enable the reader to follow the thread of the story. In these sequences, any similarity to any person, living or deceased, other than in the case of the exception noted, is entirely coincidental and unintended. I hope you enjoy your read. The Author.

After I had published my first book, A First Step - Understanding Guillain-Barré Syndrome, it occurred to me that the dream sequences described in that book wo

Marks shows how to have dreams become a reality by following the life and teachings of Jesus Christ in seven simple steps.

How to Escape Lifetime Security and Pursue Your Impossible Dream

For the Type C, or creative, personalities who want their work to "fill" their deepest creative urges, this is the frontline guide to making the transition from

"Vinny tells his roller-coaster story with passion and humor, inviting all of us to join his bicycle ride through the many winding paths of his life. Coming out

'As her work reappears, another missing jigsaw piece is replaced' Independent Described by the New York Times upon her death as 'one of Britain's best-known nov

The Story of Impossible Dreams

People of all ages, generations, and places have their own perspective about love and friendship (L&F). They have built a certain structure for the L & F relati

Motivated by the Impossible

MOTIVATED BY THE IMPOSSIBLE: RECOGNIZING YOUR INVISIBLE MENTORS offers a fresh perspective on how to overcome each difficult circumstance that life presents. LE

Because of desire to experience and explore what we really are capable of. — D. Piątkowski Inside each one of us lies the incredible potential that gives us

Track Faults and Other Glitches: Stories of the impossible in Singapore

In Track Faults and Other Glitches, journalist and author Nicholas Yong takes us on a journey into an alternate Singapore, where the impossible becomes real. De

Weaving sound historical research with rich ethnographic insight, An Impossible Inheritance tells the story of the emergence, disavowal, and afterlife of a dist